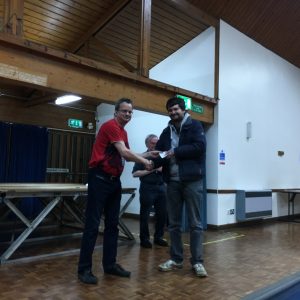 Last year the Kidlington Chess Tournament reached its landmark 40th year. As the tournament moved to its present venue, Exeter Hall, in its second year, 1979, we celebrated another 40th anniversary this year. We also increased the prize fund to £2050, adding a Round 1 Loser’s prize in the U120 section and a Veteran’s prize in the U145 section. Moreover, this year we are posting the games from the Open section on our website.

We were delighted to have a full house for the second year running, reaching our limit of 192 players on the Monday before the tournament. With the number of late withdrawals (mostly caused by flu) exactly matched by replacements from those who elected to apply to go on the waiting list, we also started with 192 players: 28 in the Open section, 48 in the U180, 56 in the U145 section, and 60 in the U120. Competitors ranged in age from 7 to 90.

As usual, Tim Dickinson controlled the Open and U180 sections and Lucy Smith the U120 section. For the U145s Andrew Varney was our Saturday controller, leaving time for Priscilla Morris to recover from her journey back from the Gibraltar event before joining us as controller for the section on the Sunday. As ever, they all did their work efficiently, and in a friendly and unruffled way, despite some frustration caused by our laptops behaving with unwonted and occasionally extreme sluggishness.

No grandmasters played this year, but there was still a sprinkling of titled players: IM Richard Bates and FMs Marcus Harvey, William Claridge-Hansen and James Jackson. This time James came out on top by beating Marcus in an exciting last-round game to reach four points, having drawn in Rounds 3 and 4 against Bates and Claridge-Hansen, who shared second place on 3.5 points along with Oxford City’s Jon Manley, who was returning to the event after missing two years. Two more local players, Oxford University’s Tim Foster and Daniel sutton, shared the U190 grading prize, while Cowley’s Nick Burrows shared the Round 1 Loser’s prize with Stephen Peters.

The Oxfordshire Individual Championship title and trophy go to James Jackson, who had already won the Open section at Witney in October outright and took his score in the Championship to 8.5/10 by his performance at Kidlington. His nearest rival was Cowley newcomer Eldar Alizada, from Azerbaijan, back on six points.

The U180 section was very closely contested, ending in a five-way tie for first place between Roger de Coverly, Colin Purdon, Paul Colburn, Tom Matko and Alex Rossiter, all on four points. Among the other prizewinners was Dave Robson (Cowley) who won the Round 1 Loser prize together with Robert Taylor and Trevor Holt.

The U145 section, which itself produced a five-way tie for first place last year, was won outright this time by Rich Wiltshir on 4.5/5, followed by four players on four points: Witney’s Howard Searle, Peter Dimond, Jim McKie and another newcomer to Cowley, David Dyer.

In the U120 section, first place was shared by 14-year-old Jack Tye and Cowley’s Stephen Ennis. Both dropped just half a point, having drawn against each other–in the first round. Half a point behind, on four, were Tamal Matilal (of the sadly now disbanded Cowley Workers club), veteran Barry Miles, Jason Madden, Duncan Clarke, and Cherwell School’s Zulfi Heydon. Barry took the Veteran prize, Jason the Round 1 Loser prize, while the other three shared third prize.

Banbury Chess Club’s team, consisting of James Jackson, Gary Jackson, Carl Portman and Chris Evans, narrowly took the team competition prize with 13.5 points out of 20, just half a point ahead ahead of ‘Cabsham’ and a team from Aylesbury Chess Club.

For a complete list of prizewinners and the crosstables for the four sections, please consult the other pages under the ‘2018’ tab on this site.

As usual, Andrew Butterworth of Chess Direct provided the excellent bookstall as well as the boards and sets and some of the clocks we used, and we are pleased that Helen Hackett (Hackett’s Food & Drink of Witney) was again able to provide us with the fine selection of refreshments. My thanks to them both.

A tournament organizer has to rely on many other people in a variety of ways to make things happen and run smoothly, and it is always a pleasure to thank them for what they do. In addition to the section controllers, and Andrew Butterworth and Helen Hackett (already mentioned), I would like to thank the staff at Exeter Hall (especially Bert) as well as Ian Brooke and, this year, I am very glad to welcome to our organizing team a new member, my Cowley Chess Club colleague, Raj Panicker, whom I also thank. Among other things, Raj set up the facility to enter the games of the Open section, and has nearly finished entering them.

Finally, my thanks go to all the 192 players who competed at this year’s Kidlington, and to those players and others who made donations to our funds (vital to our long-term survival and to our support for local chess).

On Saturday and Sunday 2 & 3 February 2019, we return to Exeter Hall once more for the 42nd annual Kidlington Chess Tournament. We look forward not only to welcoming back old chess friends but also to making new ones. Do come!